Chronic illnesses constantly ask the sufferer to make choices which inevitably seem like lose-lose. If you live with chronic illness, you know that well. If you don’t, then even at your most well-intentioned you live with ignorance as to what people like with on a daily basis. We are not brave, really. I certainly don’t feel brave today.

Today I woke up in pain. Ankylosing Spondylitis is a rare, potentially degenerative, unpredictable arthritic condition which affects primarily the spine but also other joints. It’s normal for me to wake up in pain, but today the levels were higher than usual and, as usual, for no discernible reason. Tight hamstrings, pain all the way through my back and neck. About 6/10 on my scale; on a normal person’s (apparently AS sufferers by necessity develop an unusually high tolerance for pain) it’s probably around 8/10. Apparently what I rank as north of 10/10 is worse than an especially painful childbirth.

I had planned to go to the gym today – I’ve put on weight and need to keep up the momentum on my new regime. Going to the gym will probably loosen me up a bit , but high pain brings with it a willpower melting emotional low. I lie in bed before the alarm sounds (pain always wakes me up) and wrestle with the trip to the gym. I eventually give in and doze fitfully through waves of pain and comfort myself that I’ve already been to the gym twice this week and it’s only Wednesday.

I slowly work my way into the day at my desk. The pain doesn’t go anywhere, and I’m tired. Pain is tiring, and I’m wrestling my mood. A while into the morning and it’s felt fairly productive. My concentration is all over the place, though. Pain does that. I have some top-up pain killers for days like this. If I take them, the pain will ebb somewhat and in theory I should be able to work more. However pain killers would mean more drowsiness on top of my tiredness. Stick or twist? I stick, for the time being. The rheumatologist has told me that topping up with the pain killers could affect my liver.

It would be good for me and the dogs out for a walk later, but the very thought of controlling them on the lead ratchets the pain still further. I put off the decision for now. I feel like I’ve lived a whole day of choices and pain and wrestling. I’m emotionally and physically shot. It’s only 12:30 p.m. Suddenly even the thought of what to have for lunch utterly overwhelms me.

Brave? Most certainly not. 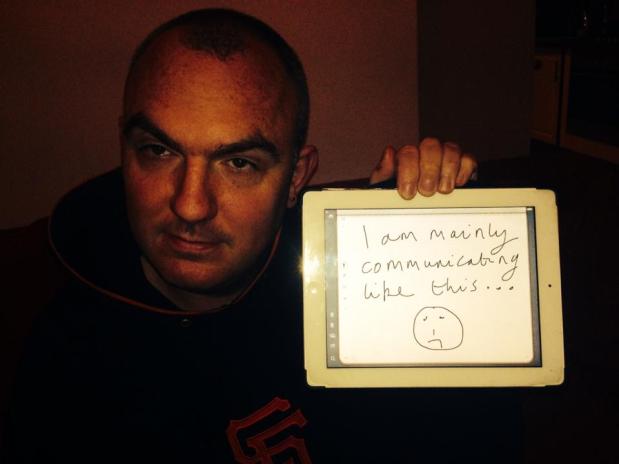 I’ve been absent from blogging for a while because I’ve been ill. As previously recorded, I have an ongoing chronic disease. This particular disease is a product, as I understand it, of a misfiring of my immune system. So to treat that disease, medication must override the part of my immune-system that is misfiring.

If you’re anything like me, you’ll spot a possible problem at this point. Immune systems are important. They protect us. So if you override part of your immune system, it follows that you’re more likely to get sick. So to combat that I take other supplements, boosters and the like. Usually this is enough; I also get an annual ‘flu jab; and in the case of something exceptional like swine ‘flu, I get two innoculations; and anybody who lives in the same house as me gets one too. Not for their sake; for mine. All this carries the label of being ‘immune-compromised’, which sounds like something out of a spy story and possibly quite cool, until you actually experience it.

This is how it plays out. I experience chronic pain from my ‘regular’ disease; I’m also vulnerable to infection in ways other people aren’t. If I’m going to get something like the ‘flu, I will get the ‘flu with a style and intensity beyond the experience of most; and I’ll be left more tired than most for longer than most after the worst of the symptoms have abated because it takes my immune system, such as it is, a while to recover.

About three or so weeks ago now, the ‘flu hit me hard – for the first time in years. I croaked my way through a Sunday service and spent the rest of the day lying on the sofa. I woke up the next morning without a voice; as well as the whole package of ‘flu symptoms. I didn’t think people actually lost their voice until it happened to me. I was unable to speak at all for about 3 days; and it was a real effort for another 4 days or so. I ended up missing two Sundays due to the ‘flu; now I am more or less back in action, though I’m still at reduced capacity due to a pretty much permanent sense of exhaustion.

I bloody hate feeling like this. I’m quite a good patient with my ongoing chronic illness; to be honest, you have to be a good patient and just get on with it as best you can if you’re to have any sort of life. Add a a bonus ‘flu to the package? Not so much. I moaned (sometimes inaudibly, I grant you), I complained, I grumbled and generally moped. At least I got to read and listen to and watch stuff. Still I grumbled, though. I wanted to work, but couldn’t. I still can’t do so; not at full capacity, anyway. Yesterday I slept for two hours in the afternoon; at least my job allows me to shape my time to do that, but still that’s not me. If I ever sleep during the day, it tends to be for 20 minutes; not 120.

Which brings me to man ‘flu. You know what that is. It’s the long-standing, culturally accepted way of rolling out the old cliché that men tend to fake illnesses, or are bad patients, or exaggerate symptoms.

Let me make this very clear. I don’t fake, I don’t exaggerate. If I have a bad day of my regular disease, the level of pain is (I’m told by a female rheumatologist) in excess of childbirth. If I do anything on a bad day, I underplay it so you don’t get sick of me ‘complaining’ about a level of pain most people either never experience or if they do, it’s in exchange for a new life at the end of it. So ‘jokes’ about man ‘flu really, really bother me. They bother me because they load guilt on to me when I have to rest but start to feel an unconscious pressure to get on with life so I don’t look like a fake. It pushes me work (ineffectually) when I should really rest. I don’t fake; I don’t exaggerate. I don’t really know anyone, female or male who does. I know such pressure should be resisted, but when you’re ill your defences are low and your capacity to resist is reduced.

Just be kind, won’t you? Assume the best, not the worst, please. The gap between genders grows moment by moment, assumption by assumption. Be better than that, please. Especially when I’m ill.

I’m sick of taking tablets and injecting myself.

I’m sick of being dependent.

I’m sick of being limited.

I’m sick of having ‘to be brave’ when in reality I’m not.

I’m sick of wondering if it will get better or not.

I’m sick of the ideas people have about my sickness when they know nothing about it.

I’m sick of looking at people with no major health problems and feeling jealous.

I’m sick and I am strong.

I’m sick and I accept that.

I’m sick of being lonely in crowds.

I’m sick and I laugh about it.

I’m sick of the well-meaning people who get it badly wrong.

I’m sick of explaining that there’s much I can do, actually.

I’m sick, and with that come many gifts and insights otherwise unavailable to me.

I’m sick and I need you.

I’m sick and I know what it does to me.

I’m sick and I get scared.

I’m sick and that changes what I care about.

I’m sick and I have perspective.

I’m sick and that leads me to great thankfulness.

I’m sick which means I am accustomed to waiting.

I’m sick and there are days I feel helpless.

I’m sick and that costs money.

I’m sick and that brings the judgements of others with it.

I’m sick which means I have lost much.

I’m sick and sometimes I don’t want to talk about it.

I’m sick and the reactions of others causes me concern.

I’m sick and sometimes I act as if I’m not.

I’m sick which means I grieve.